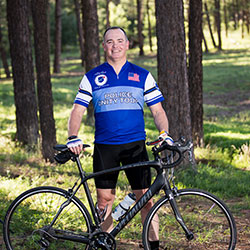 In 2013 Flagstaff Biking Organization sent FBO Board member and Flagstaff Police Officer Dave Needham to the League of American Bicyclist four day League Cycling Instructor class. During this class Dave learned of safety and diversion classes that other communities in Arizona had created for cyclists. Dave learned that in Tucson for example, if a cyclist received a traffic ticket for running a stop sign they could attend a safety/diversion class and have that ticket dismissed. The class in Tuscon and other communities ranged in price from $65 to $85, which while less costly than the civil penalty still seemed too costly.

Dave set out to create a safety and diversion program that accomplishes the same end result at no expense to the cyclist. Thanks to the dedicated City of Flagstaff staffers at the City Attorney’s Office and the Municipal Courts the first City of Flagstaff Bicycle Safety and Diversion Class was held in City Hall on August 17. The class is designed to inform cyclists on their rights on the roadway as well as their responsibilities, proper lane usage and positioning, and best practices. This class is free to cyclists that have received a civil traffic citation at no expense which makes it the first program of its type in the State and possibly the Nation. The class consists of Powerpoint slides and discussion and is designed to run approximately one hour. The class is also available for free to any cyclist that wishes to attend to learn the curriculum.