Clips of Faith Beer and Film Tour-Send in your film! 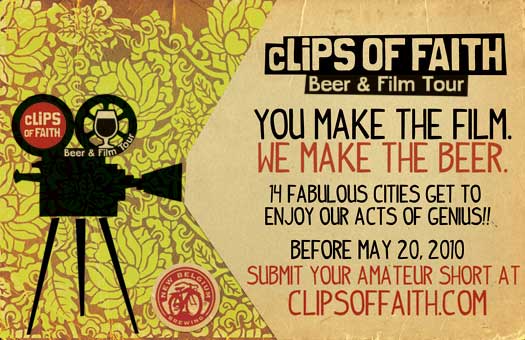 New Belgium Brewing Co. plans to take to the road this summer and fall for its inaugural Clips of Faith Beer & Film Tour and will be coming to Flagstaff on August 13th!

The Fort Collins brewer put out a call for short digital, film and video submissions to be screened as part of a fourteen-city tour. The festivities are slated to kick off in Madison, Wis., on June 17 and will come to our fair city of Flagstaff on August 13th!   Proceeds from the events will benefit local bike non-profit groups with Flagstaff’s event benefiting Flagstaff Biking Organization!

Submissions must be between 10 seconds and 10 minutes long and be posted by May 20 on the Clips of Faith YouTube Group. Additionally submission information and rules can be found at www.clipsoffaith.com. The top three submissions will be treated to a private screening and beer-paired dinner at the brewery.

“The Clips of Faith Beer & Film tour is a celebration of the innate creativity of both brewing and film,” said event director, Meredith Giske. “We’re looking for eclectic and creative short film submissions to complement the beers we are bringing from our Lips of Faith portfolio. These are some of the most creative beers we make, so it will be a one-two combo like you’ve never seen.”